Robe is a radiator that can be exclusively electric or combined (electrical + hydraulic). In addition to warm it has the function of heat electrically two bathrobes at the same time with low power consumption in the mid- season too, hiding them behind it and keeping your space well organized.

In the combined version (hydraulic + electric) there is the connection (two pipe valves with
40mm wheelbase) for the hydraulic implant as well as the electrical function described above.
In the hydraulic function the power developed is 630 watts.

In both versions an electric wall mount must be provided.

Made in aluminum with epoxi matt finishing of high resistance, available in black and white

A mirror is placed on the front surface. 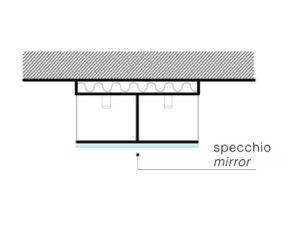